One of those situations is when it makes a cameo in fiction, with examples such as nmap and the inclusion of Emacs & eshell in Tron Legacy.

Another unfamiliar situation is when the software runs on an unexpected hardware or OS.

Can it run Doom?

Doom is the king of this category.

It’s common sense that almost every device with a bare minimum of computing power can run Doom1.

Emacs has in essence less potential than Doom due to its comparatively hefty requirements (especially its modern versions).

But that just forces us to take other approaches:

The first approach is basically called retrocomputing and can be painfully cumbersome. It’s only reserved to the most stubborn internet archive dvelvers.

Actually this goes further as the GUI rendering is built on top of the TUI codebase.

Whoever made Emacs into a native X11 program […] pretended the GUI was a text terminal.

Emacs on the Go

Another appeal of exploring alternative hardware is the perspective of having an Emacs instance on the go.

Nowadays the best approach is to have an Android device with Emacs installed through Termux and a bluetooth keyboard.

Most people use a smartphone. If the screen feels too small, one can use a tablet3.

As far as Org-mode is concerned, we nowadays have decent applications such as Orgzly (Android), beorg (iOS), organice and org-web (web, mobile-friendly).

Back in 2007, smartphones (as we know them) where in their infancy and I was in dire need for a solution.

At the time, the only possibility was to find an UMPC. Without much money in the bank, I settled for an old (even for the time) HP Jornada 680, bought secondhand for not much.

It ran a custom version of Windows CE (in German) but a distribution of Linux (Jlime) could be run on it.

Emacs wasn’t available in its repositories but I was able to compile it after fetching all of its dependencies.

And here I was, with my little data island in my backpack. 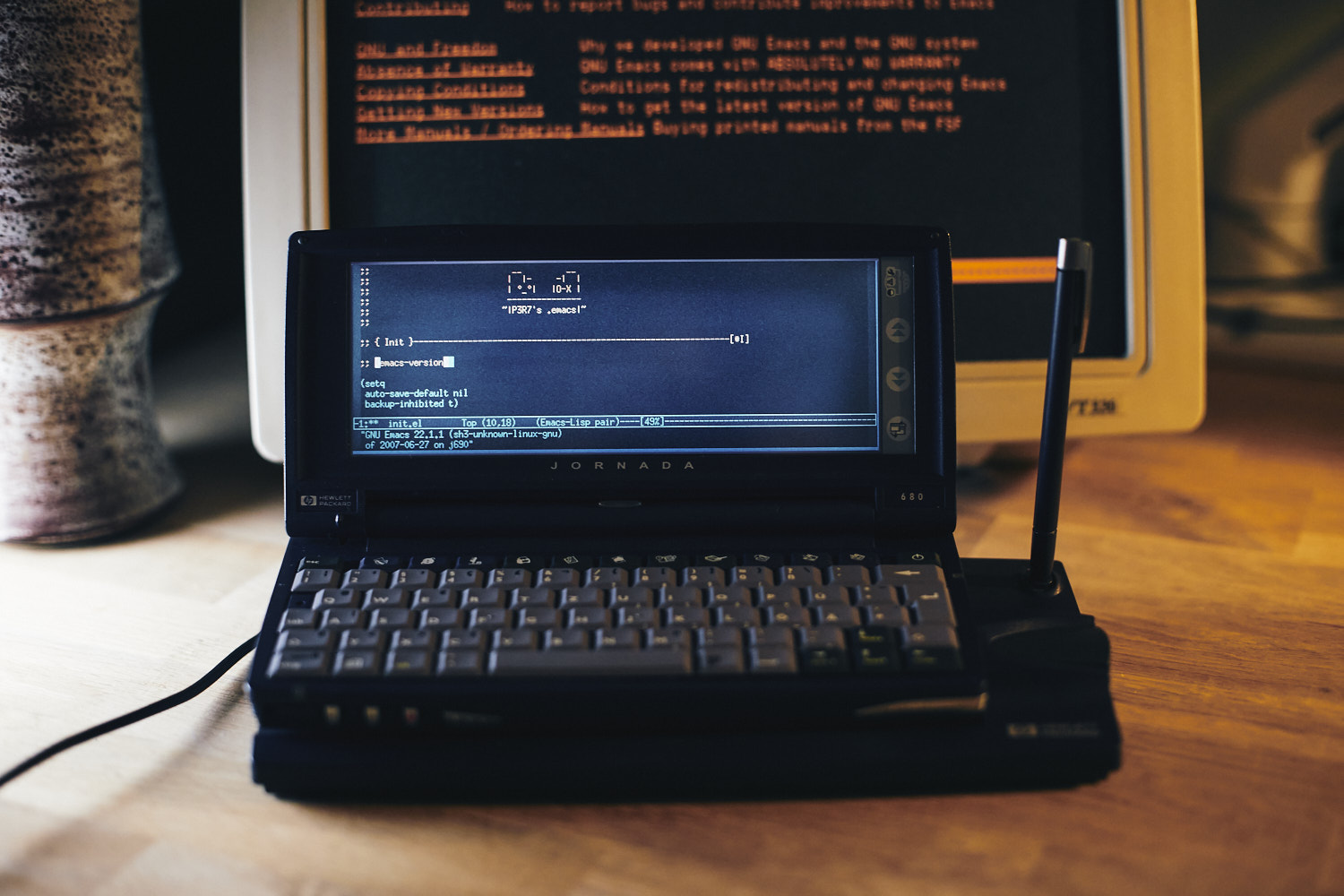 My config from these old days was pretty barebone as compared to the current incarnation.

Emacs on a actual dumb terminal

Even the most recent versions of Emacs still have stellar support for hardware terminals.

I don’t know who (apart from a few enthusiasts like me) still access Emacs through those devices.

There are some configuration specificities (addressed in a later post) but things mostly just work. 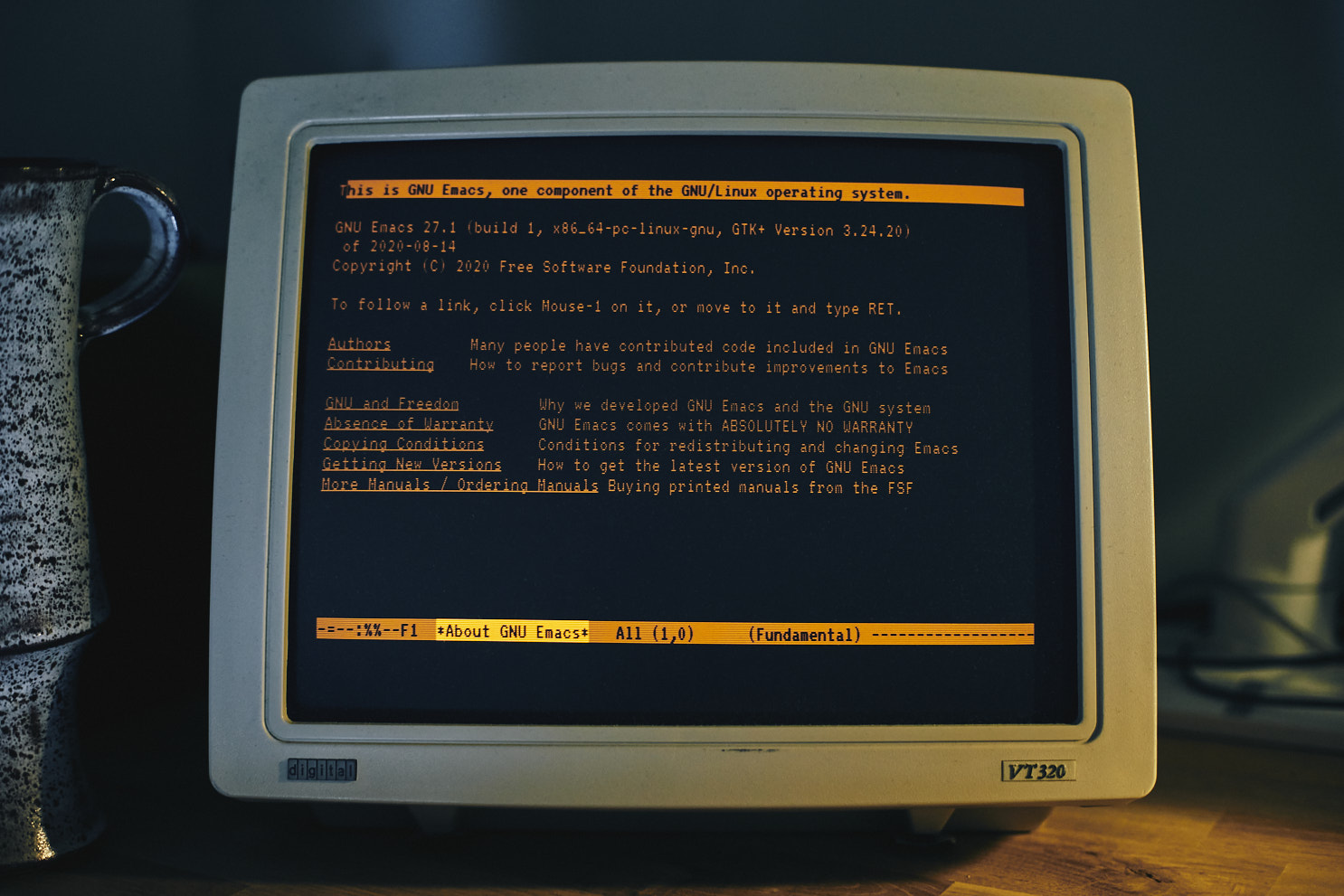 Other examples spotted in the wild

Emacs through a Minitel 1B.

Emacs on the Purism Librem 5.

Emacs on the PinePhone

Emacs accessed from SSH on an old Nokia phone.

Emacs on the GeminiPDA (Android-based).

Emacs on the Psion 5mx.

Emacs on the Onyx Boox Max 3, through Termux.

Emacs on the Noodle Pi.

Emacs on the Paper Pi.

Emacs on the monome norns.

Emacs on a Pebble watch (this one is actually just a “face”, not the real deal).

I was quite surprised to see that this post got submitted to Hacker News and won the front page lottery.